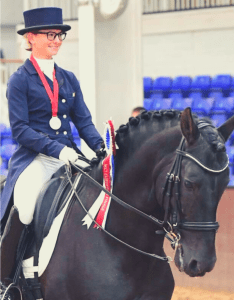 A deposit  is required to book a lesson, with full payment to be made on the day of your first lesson.

Any cancellations on the day of the clinic will incur the full fee for that lesson. 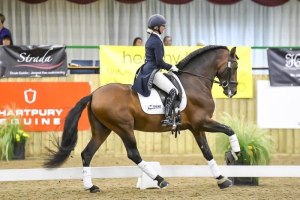 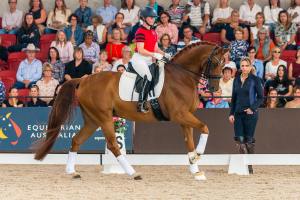 throughout Europe. As an EA Judge she provides a conscientious and enthusiastic approach to training with experience in a variety of breeds from Young Horse to Grand Prix

International FEI Dressage rider and EA Judge based in Central QLD
————————————
Alice’s Story….
Alice Hurley has represented Britain & Ireland at FEI level Internationally throughout Europe.
She has a conscientious and enthusiastic approach to training and has over 20 years experience of Dressage competition; producing a variety of breeds to the highest standards.
As an EA Judge, she incorporates a special focus on strengthening correct foundations and accuracy of test-riding with a passion for progress for each partnership.
• Clear, encouraging instruction
• All ages and abilities welcome
• Young/Novice Horse – Grand Prix
Alice began her dressage career in 1999 after winning the British Dressage National Talent Spotting. During her 7 year stint as part of the Under 21’s British Dressage National Squad, Alice had the opportunity to train with many of Britain’s top trainers and was selected to represent Great Britain on several occasions including competing in Holland, Ireland, England and Northern Ireland.
After finishing High School, Alice began working as a rider for the world-renowned Woodlander Stud where she gained invaluable experience in handling youngstock, backing, starting and producing young Dressage horses to the highest standards. Alice left Woodlander Stud with a 3 year old Hanoverian mare of her own and began studying her Equine Science Bachelor of Science degree at Hartpury College (University of the West of England) where she was selected for the Elite Squad on their Sports Academy; receiving training from Olympic Gold Medalist, Carl Hester.
Upon completing her degree in 2010, Alice began working for a Rehabilitation and Dressage Centre in Oxfordshire where she became Head Rider and Manager. During her 8.5 years in Oxford, Alice trained up to Grand Prix level with four-time British Olympian, Richard Davison. Alice enjoyed National and International success up to FEI Inter 1 with horses she had produced from 3-year olds.
Alice accumulated many medals and titles at CDIs, MCI Europeans and SICAB (Spanish Horse World Championships) across Europe; including in Spain, Ireland, Belgium, Italy, France and England. Before her big move to Australia in April 2019, Alice was selected for the Horse Sport Ireland High Performance Olympic Pathway Squad 2018/19.
Australia….
Alice spent a year working as the Dressage Rider & Trainer for the beautiful Sutton Farm Equestrian Centre in the Southern Highlands of NSW; where she trained and competed a variety of horses and ponies, including the talented Bluefields Berlin. During her time in NSW she qualified as an EA G Level Judge going on to judge many competitions in the area.
Under the exceptional tuition of one of Australia’s leading International Grand Prix riders, Brett Parbery, Alice and Berlin were selected as the Advanced partnership for the Dorothee Schneider Masterclass at Willinga Park’s CDI4* — “Dressage by the Sea” in February 2020.
COVID-19 promptly forced a unplanned move to Theodore in Central QLD, where Alice lives with her partner and former Australian International Grand Prix rider, Anthony Pelling.
Since relocating in March 2020, Alice has built a significant client base in Central QLD; giving regular lessons in the Theodore/Moura/Biloela areas and further afield for clinics, such as Rockhampton, Gladstone & Roma.
Alice now has her sights firmly set on producing her own horse for competition while undergoing the process of upgrading her Judging level and EA Coaching. She is fortunate enough to combine her passion for training, coaching and judging – and for the first time, self-employed, having set up her own business in July 2020 – whilst studying Bookkeeping & Accountancy.
https://www.facebook.com/alicehurleydressage
Alice can be reached via her facebook page if you would like more information about the content of her lessons.